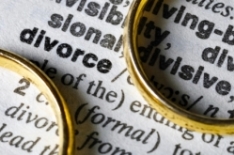 In this Series I will discuss some of the most frequently asked divorce questions I am asked. The first topic will jump right to the formal divorce process in Connecticut. There will be other articles in this series dealing with pre-divorce topics and planning, and those should always be considered before filing, but I think it is best to explain the actual filing process first and then returning to discuss those preparation steps and considerations.

Divorce in Connecticut is a civil lawsuit. It has special rules that apply but it is still a lawsuit.  One spouse sues another spouse for what is called a Dissolution of Marriage by serving on that spouse a document called a “Complaint.” Lawyers either use the court form or draft their own form. The official court Complaint form can be found here: https://www.jud.ct.gov/webforms/forms/FM159.pdf.

The Complaint tells the court some basic information about the parties, the marriage and the children. It also ends by telling the court what you want such as the type of custody of the children, alimony, child support, asset division, etc. The Complaint must be signed and given to a judicial marshal (there are other options but use a judicial marshal) to have the Complaint “served” upon your spouse with a “Summons” provided to the judicial marshal. The court clerk will give you a list of marshals if you plan on doing this yourself. The official court Summons form can be found here: https://www.jud.ct.gov/webforms/forms/FM003.pdf.

The Complaint can be served on your spouse by either the marshal giving it to them directly called “in hand” service, or by leaving a copy of the Summons and Complaint at their legal address called “abode service.” In hand service is better as it prevents a claim that it was not received or noticed. I recommend that the marshal be given the mobile number of your spouse and call to arrange in hand service.

Connecticut does not require fault to be alleged in the Complaint but does not prevent it. The filing party must state something like “the marriage has broken down irretrievably without the prospect of reconciliation.” If you choose to use a reason other than irretrievable breakdown in the Complaint you must choose from the reasons contained in 46b-40(c) which can be found here: https://www.cga.ct.gov/current/pub/chap_815j.htm#sec_46b-40

It is important to remember that even though fault is not a requirement to file for a divorce, fault IS a factor considered by the court in fashioning final orders even if you use irretrievable breakdown in the Complaint. So, you do not waive your right to use fault in negotiations or at trial if you choose to leave them out of the Complaint. I will discuss more on the impact of fault on final orders in another article.

How long does my spouse have to respond to the Complaint? There is something called the “Return Date” in the Complaint.  It must be a Tuesday and be far enough after the Complaint is served on your spouse to give you the ability to get it back from the marshal AND file it with the court at least six (6) days BEFORE the Return Date. I use 3 weeks from the date I send to the marshal to be safe. Your spouse will then file an “Appearance” as a pro se (a person who will represent themselves) party or have a lawyer file an Appearance on their behalf on or before two (2) days after the Return Date. The lawsuit has now begun.

There is a relatively new process in Connecticut called "Non-adversarial" divorce that does not require these formal steps but it rarely applies to my clients so I have not included it here.  I will do another more in depth article, but if you are married 9 years or less and have no children you may be eligible.  For more information go here:  https://www.jud.ct.gov/forms/grouped/family/NonadversarialDivorce.htm

The next article will discuss the “Automatic Orders” that go into effect when you file for divorce; when they go into effect; and what they mean.